It has been some time since FIR conducted a listener survey. For a variety of reasons, we decided it’s well past time to learn why you listen, what you like most (and least) about the show, what you would like to hear on the podcast that you are not hearing now, and other information we can use to make FIR more useful, valuable, and entertaining for you. 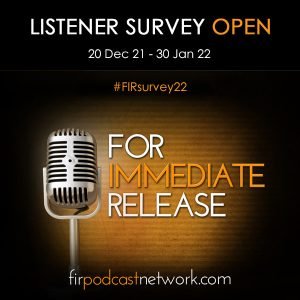 For newer listeners, some context is in order.

“For Immediate Release” launched in early January 2005 in the earliest days of podcasting. (We counted about 400 existing podcasts at the time.) Since then, the show has undergone a number of changes. For example, in our early shows, we included interviews but decided later to split them out into a separate podcast, “FIR Interviews.” Ditto book reviews. With that decision, we decided “For Immediate Release” (or “FIR”) would become an umbrella brand for shows like “FIR Interviews” and “The Hobson & Holtz Report.” Another pivot happened when we decided to produce the show twice weekly, then again when we returned to a weekly schedule.

A few years back, Neville left the show for other pursuits and the show reverted to the “For Immediate Release” name, becoming a weekly panel of esteemed experts. Then Neville returned, but the weekly schedule became a problem when Shel returned to the client-side (he’s currently senior director of Communications at a large commercial general contractor and builder), so FIR became a monthly podcast. We added sponsors, who came and went over time. We added special segments, like the Asia Report (which has had two presenters) and a segment from Eric Schwartzman. Those segments are no longer part of the current show, but Dan York’s Tech Report is.

And on it goes. We have also fiddled with the format from time to time, sometimes by choice and sometimes when there was no option. (Listener comments once drove the content of the show but we don’t get too many these days.)

We are planning new changes to the show that we hope will increase its appeal to listeners. In order to make sure those changes are aligned with what interests you, and to identify other changes that will make FIR an even more vital part of your podcast listening mix, we are asking you to answer a few questions. (There are a couple of questions about other shows available on the FIR Podcast Network, but just a couple.)

If you share the link to the survey (which we would greatly appreciate), please use the hashtag #FIRsurvey22.

It should take about 15-20 minutes to complete the survey. In return, you will have our eternal gratitude and, with a bit of luck, a much better podcast. We thank you for your time and your support of “For Immediate Release.”