Channels like children need many years to grow-up. Channels that seemingly do “pop overnight” can take years and years to really build up momentum. In the last 10 months, The Str3am has build up some “steam” with more than 1,800 subscribers and 52k views.

Although the channel was created in 2010, Alex has put out regular videos since August of 2014. But the channel started to gain traction 8 months ago when Alex released a Collab with Davey Wavey. In a Collab, two or more “creators” use the same equipment, and make unique videos on similar themes.. in this case two videos, one released on a “new” channel and the other on a popular one.

The video released on Str3am’s channel has been seen more than 6k times; by way of a comparison  the video Older Gays vs. Younger Gays that Davey released on his “Raw” channel has received more than 360k views. 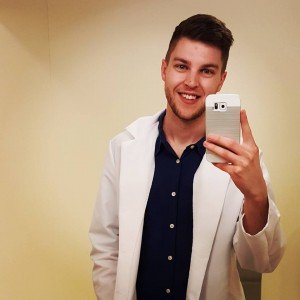 A picture of DJ Str3am at his day job

Alex hoped to create a global DJ brand for himself:

At the present time Alex’s channel has helped him build up his business in his local market. This is by itself an interesting case study. Today like any “creators” DJs are hired because they can attract an audience. It is easy to see that in 2-3 years Alex’s dream of a more global brand could come to fruition; he could certainly increase his presence along the Eastern Seaboard of the US, and in popular gay tourist meccas like Las Vegas and San Francisco.

I have highlighted Alex’s channel because it helps demonstrate the power of a single well placed Collab. Other channels have engaged in dozens and even hundreds of Collabs. Alex reports a Collab typically converts 1% (or less) of the viewer to subscribers. Alex’s day job is as a research scientist.