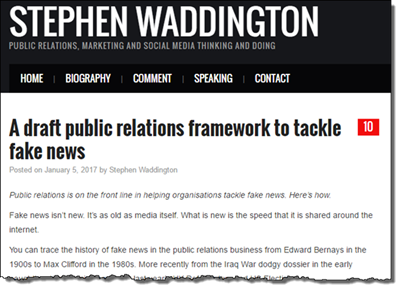 “Fake news” is one of the hottest topics in media and communications. It has been around for a long time in the form of propaganda and disinformation campaigns, yet the way it was used during the 2016 U.S. presidential election represented something new both in terms of speed and appearance. The social networks through which it was spread initially shrugged it off but now are going to great lengths to try to address it. Some are calling for media to abandon the “fake news” label as it is appropriated and redefined as any news one faction or another doesn’t like. In the meantime, it is spreading out of politics and affecting business. A fake news story perceived to be accurate can move stock prices.

Much has been written about how to deal with fake news, including one particularly level-headed framework for how PR should address it by Stephen Waddington, chief engagement officer at global PR agency Ketchum. In this FIR Interview, Wadds (as he’s known) offers his views on fake news and outlines what PR practitioners need to do to minimize its impact on their clients or employers. 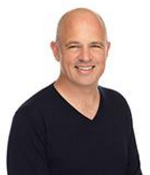 Stephen Waddington is a Partner and Chief Engagement Officer at Ketchum, responsible for driving the integration of digital and social capabilities in client engagements across the agency’s international network. He is Visiting Professor in Practice at the Newcastle University supporting the university and students through teaching and mentoring, and chairman of the Future Proof policy unit. He is co-author of #BrandVandals (Bloomsbury, November 2013) and Brand Anarchy (Bloomsbury, February 2012), and editor and contributor to Share This (Wiley, July 2012) and Share This Too (Wiley, September 2013); and editor of Chartered Public Relations: Lessons from Expert Practitioners (Kogan Page, February 2015). Stephen was President of the CIPR in 2014 during which time he helped return the organization to its roots of professionalism as set out in its Royal Charter.