In this FIR Interview I speak with Patri Friedman, an engineer and political activist about The Seasteading Institute and the Institute’s plan to create governmental “start-up spaces;” it’s like a business incubator for new models of governance. It’s easy to stress test new software, but it’s a lot harder to regression test new government structures and legal codes.

Some demand America restructure as a Christian theocracy, or revolt into a Socialist dream-state;  others want to burn “her” down so we can break-up into 30 or 50 pieces; perhaps there is another option? This interview will provide a lot of context and a primer of sorts for finding smart alternatives to theocracy, socialist purity and burning down the house.

The team at the Institute has come up with a program that will allow the testing of diverse models of governance, hosted in structures largely immune from rising sea levels.

The meta point Mr. Friedman makes is: How do we make government work better?   Once we “know” how do we test it?

Today many folks think government (in general) isn’t working, but what can you do about it? For me, it is hard to know what is more alarming: the large cohort of people who didn’t vote in the US general election, or the current political climate where large yet minority segments of religious-conservatives and secular-progressives see little reason to compromise, except agreeing compromising is for losers, and crooks.

The Franklin Experiment in Compromise is Dead

The defeat of HRC was a no confidence vote for the political status quo. It has given way to my realization that there is no longer a center left or right with enough votes to win at the polls; the fine art of political compromise has become conflated with the dirty business of compromised ethics. What comes next?

It seems plausible our large democracies and markets are heading for a breakup as evidenced by the United Kingdom’s vote to exit the European Union, the America First policies of the Trump Whitehouse and California’s governor “weighting” withholding funds from the federal government and becoming sanctuary State; meanwhile other Californians push forward a ballot initiative for secession.

Not a Dad Joke:
How are governments like software, and fast food franchisees?

In software engineering, object oriented programming allows a parent object to inherit values and properties to a child object. It’s not dissimilar to a fast food chain using a franchise agreement to allow a local company to operate using their name and brand. Although they tend to be fairly restrictive, the agreements allows the franchisee the independence to hire, manage and operate the business.

The MOU will give the Floating Island Project it’s own “special governing framework” creating an “innovative special economic zone.”

The Seasteading Institute rejected building floating cities on the high seas for engineering and political considerations. Today they are working with French Polynesia to create a floating “seastead” in the coastal waters off of Tahiti. The Tahitian government has have already signed a memorandum of understanding. The seasteaders are now working on the negotiation for a full agreement.

Patri noted that most governments they spoke to didn’t understand the independent franchisee* model. French Polynesia did. 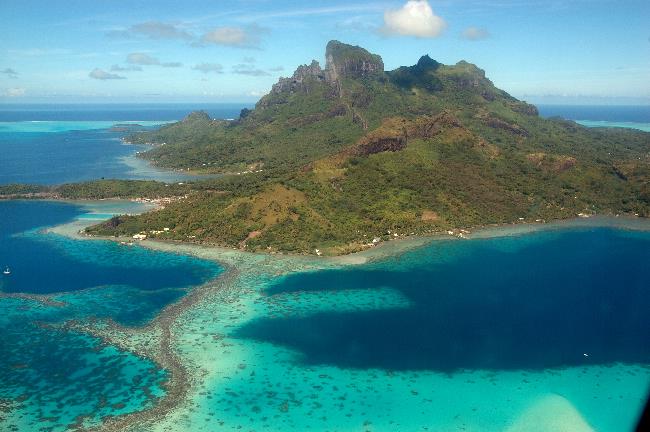 Bora Bora near but not close to Tahiti

Patri said they understood the value of that model in part because they are themselves a franchisee [*my words not his]; they understood because they are an overseas territory of France; they produce some of their own legal code but have to follow some of France’s, and in turn France creates many of its own laws, but has to follow the policies and regulations set forth by the European Union.

In object oriented programming, when the parent object changes those changes typically pass-on to the child objects. Seasteaders in French Polynesia will have some risk if the EU or France changes their laws in a way that would mandate a governance change for the Seasteaders.

Will French Polynesia actually ink this deal and will folks actually move there?

It’s to early to say, but in the end these type of decisions come down to jobs, opportunities, and investment.

It’s also possible that all of these groups and more, could be living on the same floating city, yet each under their own laws. That’s not likely in the near term, but if that can be tested and debugged we may learn something that can be used to keep the American and European dream from breaking apart.

We also can’t afford another experimental failure like China’s cultural revolution, the deeds of Axis powers in World War II, and the current disruption in Argentina. It would also be nice to find a way for ethnic Russians in the Crimea and other parts of Ukraine to live more like Russians without Ukraine and Russia going to war, and without Ukraine having to give up their territorial sovereignty.

If all of this sounds too good to be true, it worth noting it has happened before. Hong Kong under British rule is a great example and Patri and I discuss that briefly.

Patri refers to seasteading in Polynesia as “coastal” seasteading. With climate change un-checked there soon will be a lot more coastal areas perfectly suited for coastal seasteading. Perhaps some place as close as Miami beach or New York harbor… but the way things are going the entire country of Tuvalu might become available before it slips entirely under the waves.

If you thought about leaving the country after the last election, and you don’t know where to go then perchance on “some enchanted evening” you too will find a country of your own making in the shallow aqua-blue waters of French Polynesia. Submit your “application” here; it’s a survey.

The Institute is also releasing a very optimistic book: Seasteading: How Floating Nations Will Restore the Environment, Enrich the Poor, Cure the Sick, and Liberate Humanity from Politicians

Note: Patri is the son of David D. Friedman, and the grandson of Milton and Rose Friedman and beyond skills in Engineering he has also won a few games of poker.
FIR Interviews are sponsored by Thornley Fallis Communications.