Public Relations practitioners routinely attach Word documents, images, and other assets to emails as part of their pitches to journalists and influencers. In an effort to bring document-sharing into the 21st webified world, Jason Kintzler (founder, president, and CEO of PitchEngine) introduced Compressor, which he describes as “a drag-and-drop OR smart bomb.” The idea is simple: Drag a Word document, JPG, PNG, or GIF file onto Compressor, add a headline, and suddenly you can share the files through Twitter, Facebook, email, or other channels. (I tried it out with the For Immediate Release album art. The output is shown below.) 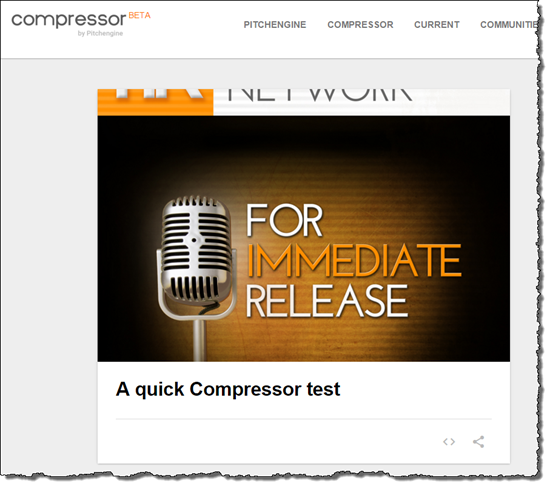 Additional file formats will most likely be added after Compressor comes out of beta. The best news: It’s absolutely free. In this FIR Interview, I chatted with Jason about the motivation for creating Compressor and how he envisions it being used. We also talked about other PitchEngine features, including Communities, a place where people in a geographic area can share local content. Jason also discussed the latest upgrades to PitchEngine, the press release service that has become popular with small businesses.

Try Compressor for yourself at http://c.tiny.pr.

intzler is the Founder and CEO of PitchEngine. He created and bootstrapped one of the marketing industry’s most popular tech startups from small town Wyoming back in 2008. Now, with more than 50,000 users that include such iconic brands as Walmart, Budweiser and the Country Music Association, PitchEngine has grown to employ many of the state’s most talented people at their headquarters on Main Street in Lander. He also authored the book, New American Startup, an inspirational story of how western independence and self-reliance led Kintzler to create a disruptive web technology from the unlikeliest of places.

Jason has been credited with “heralding in a new era of public relations” by creating “one of the PR industry’s most transformative innovations.”

Jason regularly shares his passion for new media and business by speaking to groups of all sizes at events like SXSW, PRSA and at universities like Stanford, USC and Marquette. He believes that success is directly attributed to an incredible work ethic, passion and creativity and requires jumping fences and challenging status quo at every juncture.