Alabama News Center looks like a well-executed news site. It should; the staff at Alabama Power works hard to make sure the site delivers “the news and information that matter most to Alabama power customers,” according to the site, which “also tells the stories of the people and businesses powering our state, striving to make Alabama a wonderful place to live and work.”

The center is not exactly a traditional content marketing effort, since Alabama Power is not front and center. A typical home page features stories on the University of Alabama-Birmingham to fight cancer, an increase in home sales in one Alabama community, the success of a local food company, the effectiveness of Alabama consultants, and a study into how to create new jobs in coal country. The site is not the first content portal in which the brand isn’t prominent — there are plenty of those — but it is among the few that tackles the idea of delivering news and features based on geography rather than industry.

In this FIR Interview, Alabama Power Communications Strategist Ike Pigott explains the goals for the site, how it evolved, what it takes to maintain it, and the success it has achieved (which includes other organizations emulating it). 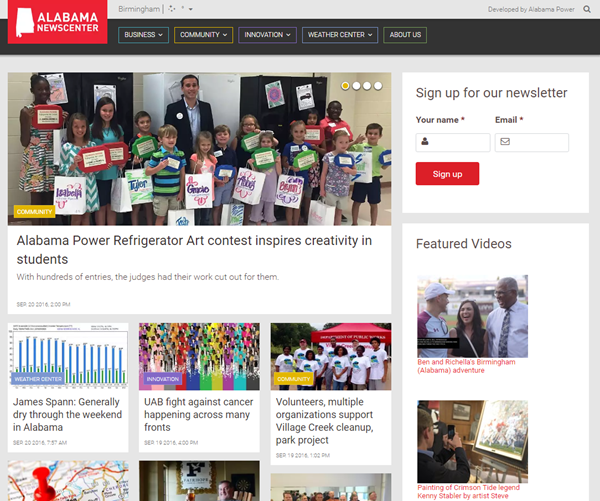 After more than 16 years in television news, Emmy-winner Ike Pigott left to feed his passion for crisis communication. While building his consultancy, he started working with the American Red Cross – first as a local communicator in Alabama, and finally as the Director of Communications and Government Relations for a five-state region. It was during his time at the Red Cross that he pioneered the use of social media, developed the first disaster-response blogs, as well as the non-profit’s Twitter account all the way back in 2007. For the last seven years, Ike has worked as a communication strategist and spokesman for Alabama Power, an electric utility that serves more than 1.4-million customers. He helped shape the Social Media Guidelines for Alabama Power’s parent, Southern Company, and serves on the system-wide Social Media Advisory Council. In addition to media relations duties and serving as editor of the corporate NewsCenter site, Ike works across the company to help individuals and departments get the most out of social media tools. Ike has been a featured speaker at dozens of communication conferences in the United States and Europe, and is considered a thought leader in the integration of social media in utilities and other regulated industries.