We begin with sad news this week: Tech PR veteran Alan Weinkrantz (right) was killed in a freak auto accident in Israel. He was a positive, upbeat guy and one of the great PR reps in the tech business. Our condolences go out to Alan’s family.

Tribune Publishing Co. changed its name to “tronc Inc.,” announcing the change in a press release that the Washington Post’s Erik Wemple dubbed the “worst in the history of journalism.” The announcement didn’t mention news or journalism, raising questions about just what tronc is. Its goal of producing 2,000 daily videos is yet another indication of the changes that are taking news publishing multi-platform, with each story, video and native ad courting its own audience. In our next show we’ll discuss what Jeff Bezos is doing at the Post. 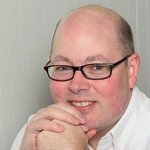 wson is a prolific author, digital marketing expert, search engine aficionado and editor-in-chief of IBM.com. He’s also co-author of the new book Outside-In Marketing with Mike Moran, who joined us on FIR B2B 41.

James is an expert at using data to understand how customers think so that you can align messages to explicitly and implicitly stated needs. Data can be used to learn about customer priorities and journeys from things like keyword choices and browsing paths. That can be translated into content that defines a brand in terms of their their needs. The free Google AdWords can yield a bounty of information about the terms people use and the hidden priorities that are visible in their searches.

Using the wrong terms can sabotage your marketing efforts. James tells of how IBM’s “banned word list” at one time required use of the term “notebook” to describe its portable computers, even though customers overwhelmingly searched for the term “laptop.” It has changed that rule subsequently.

Take a staged approach toward learning to speak like customers, he advises. Marketers need to use the language of customers and prospects to define their brands. But new terms can be introduced if they’re mapped to existing ones.

One of the ways IBM did this was with “cognitive computing,” a term that got about five Google searches a month in 2011. Rather than pounding on a term that nobody used, IBMers focused on the words people were already using to describe similar concepts. By guiding people toward the new term, the company was able to grow “cognitive computing” searches to 1,400 per month in only about a year. “Smarter Planet” is another outstanding example of IBM branding success.