Brands have fans, and so do cultural touch-stones like cars. If you are trying to reach the fans of your brand or build communities of interest you may find that what really desire is fresh daily content. If you are producing content quality, variety and authenticity are all critical elements; imagine how hard it is to stay fresh on a daily basis.

I have found two YouTube channels that are producing daily content and (perhaps because of their release schedule) have grown incredibly fast. The Last Harpy went from 0 to 50k subscribers in less than a month — timing the channel’s launch to the ending of the 6th season of A Game Of Thrones (AGOT) the block-buster series from HBO (based on the universe created by author George RR Martin).

The second channel I discuss is Vehicle Virgins run by Parker & Eddie who until recently were both University of Michigan students studying automotive engineering. While The Last Harpy covers the realm of fantasy and folks like Faceless-Men, and popular theories like R+L=J,  Vehicle Virgins covers fantasy automobiles like Lamborghini, Bentley and Rolls-Royce as well as far more grounded topics like how to park, and car makers like Kia, Ford, and even used cars.

Stats and Data from SocialBlade 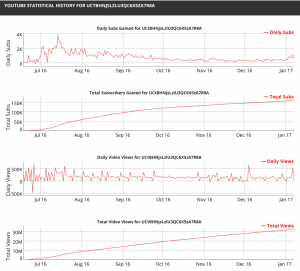 The stats history for the YouTube channel The Last Harpy 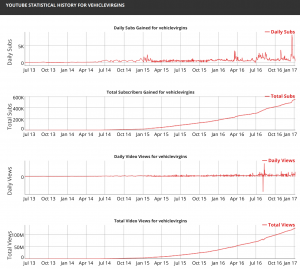 I look forward to hearing from you: Harry Hawk (Twitter | Web).

*  on AGOT the Harpies wear masks to hide their identity and true to form there isn’t any easily “Googled” data about the creator(s) of The Last Harpy; and while there is a lot of information about Parker, Eddie from Vehicle Virgins seems to have a limited social foot-print although he does work for Ford. Park is listed as the CEO and it feels more like his channel.