You are here: Home / YouTubular Conversations / Antisemitism on YouTube | The Culture of Hate

Antisemitism and YouTube stars are in the news. PewDiePie paid to stage the message “Death to all Jews” within in a sketch piece and Parker from Vehicle Virgins reported he was subjected to a large volume of anti-Jewish vitriol following the break-up with his apparent co-host Eddie.

A Global Culture Of Hate

The biggest news is after releasing an episode filled containing antisemitic comments PewDiePie (whose channel is synonymous with YouTube) has had his partnership status reduced by Google/YouTube, lost a show on YouTube Red (their premium subscriber offering) and his relationship with Disney’s Maker Studios terminated.

YouTube, Google and Disney acted fast (to their credit)

The offending post has been removed; I never saw it while it was up.

PewDiePie is the pre-eminent YouTube STAR with over 53 million subscribers.

In a story that has attracted Global attention (link), PewDiePie hired two guys in Indonesia via Fivver to hold up a sign that said “Death to Jews.” PewDiePie then reacted to the guys and the sign in his video. It was reported that he claimed to have been trying to put a spotlight on what is possible to do via Fivvr.

Fivvr which monitors all communications within it’s market. If true that Fivvr was used, then if there is blame here, certainly Fivvr deserves it’s share of it (for allowing that message to be sold).

“I apologize for the words that I used as I know they offended people and I admit the joke itself went too far.” 04:24

PewDiePie considers himself a “Rookie Comedian”

Felix mentions the Wall St. Journal reporting that in the last Six Months 9 of his videos have had antisemitic messages, charges he claims “are insane.”

Although PieDiePie does present comedic material, and often creates pieces with exaggerated drama — it seems he could have used a less offensive statement and still made his point. Although he over a million fans in the last few days he has released a video claiming this is because of a YouTube glitch.

While I think folks should have a lot of latitude when creating humor and social commentary, I am certainly angered and upset by what has been reported; it seems bigoted, hateful and not appropriate for the youthful demographic on YouTube.

Around the same time as this crisis with PewDiePie, Parker from Vehicle Virgins claims to have received a large number of antisemitic messages including some that wished, “his family had died in the Holocaust.”  It’s worth mentioning it here for several reasons including that given the rise in anti Jewish and Muslim threats – PewDiePie’s content (which I have not seen), seems to play into this culture of hate (no matter what his intent).

Why Did Parker Get Hate Messages?

The Vehicle Virgins channel (link) which I discussed in several previous episodes (including here) has had a failing out among the hosts Parker and Eddie. In classic he said/he said drama it’s not clear here who was at fault. It’s also not clear previously who owned the channel. Parker has asserted that the he created the channel years before he met Eddie.

Although Parker hosted most of the videos on the channel. The plurality of the name “virgins” and their sign-off catch-phrase “please subscribe to our channel” seemed to imply a relationship beyond simply work for hire. None-the-less, they have gone their separate ways. Parker released a video which detailed the situation and plugged Eddie’s new channel.

Uniquely, although he plugged the Eddie’s new channel he didn’t provide “a link in the notes” which is rather de rigueur. Part of the blow-up here is a livestream that Eddie did complaining about the situation.

Eddie’s new channel (link) has picked up over 25k subscribers. Eddies channel which was created in 2015, as of late January 2017 only had 1,600 subscribers; between the 11 – 15 of February 2017 the channel picked up over 13k new subscribers (data from SocialBlade.com (link).

I have reached out to Felix Arvid Ulf Kjellberg (PewDiePie), Parker, Eddie and YouTube press email account asking to talk to them on this channel; I have not heard from them but I would be delighted to talk about their prospective on this story.

It’s one of my long standing contentions that major YouTubers have as large or larger audiences than top rated TV shows; although the length of the content (YouTube videos are often fairly short), and the frequency of release (YouTuber’s often release multiple episodes weekly) is hard to compare. Here is some data. 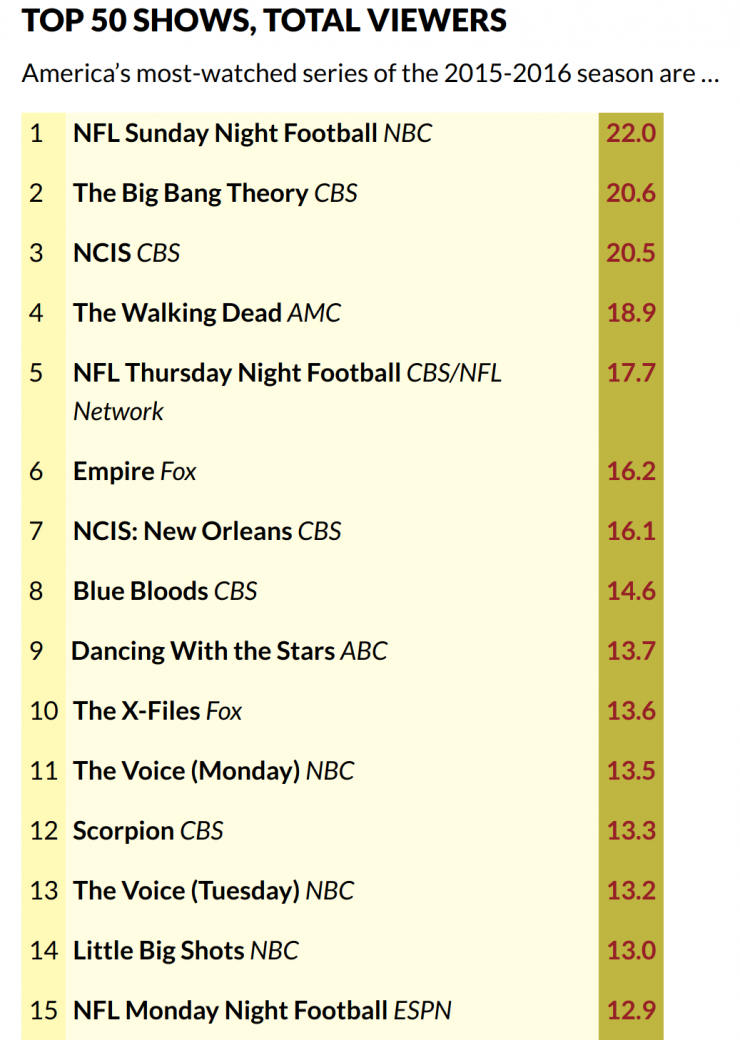 Total viewers for the top rated shows in 2015/2016 in the USA. From IndieWire. We can see that PewDiePie’s weekly viewership fits in here very well, although we don’t know how many unique viewers he has.

In the podcast I conflated another chart that had ratings points with viewers. Ratings point are the share of total viewers. I’m sorry for the mistake. 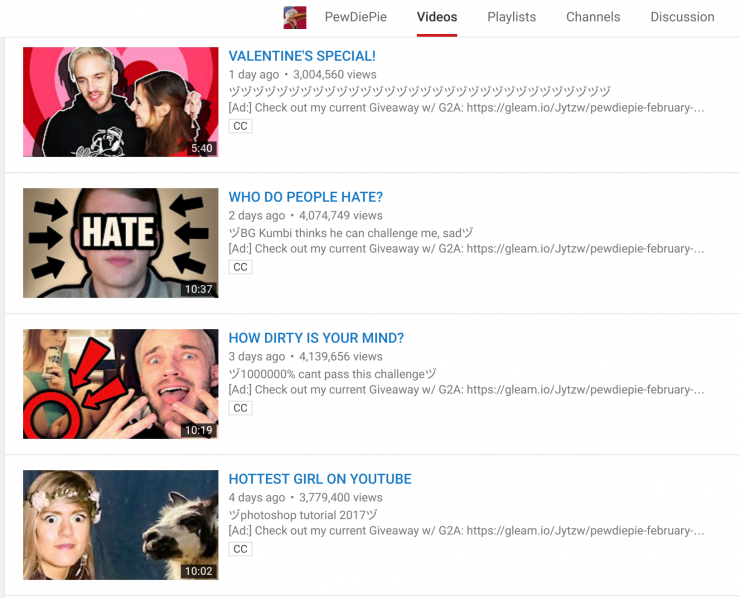 The last four videos at the time this blog post was written showing a 4 day viewership (not unique) of ~15 Million.

On site promo for PewDiePie’s Channel. 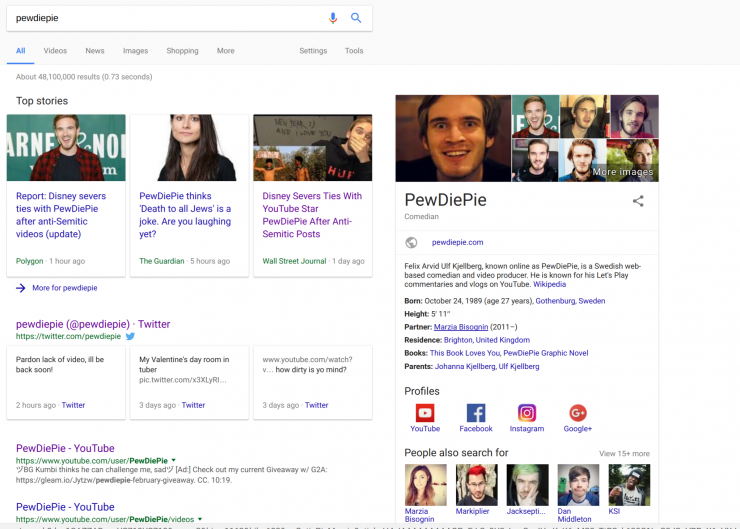 SERP from Google.com for the search term PewDiePie from Feb. 15, 2017. This SERP demonstrates how PewDiePie’s brand and image dominate Google and YouTube. It would be hard for the largest brands to have this level of SERP domination.